How to use robots for form finding?

Approxymotion is the further development of the Resoloom research project focusing on motion-based forming. It is an attempt to apply the process of digital design to the physical space. Traditionally, forms are transferred from paper/virtual space in architecture to building through fixed-shape molds or an assembly of many elements. The goal of this project was to set the “mold” into motion while maintaining the parametric nature inherited from the digital model. The result is a motion-form that computes between the initial motion input, the built geometry and its material properties.
The nested relation <corner-cutting> from rough to smoothened layers displays the gradient condition from the accuracy of the robotic motion control to the averaging behavior of the elastic net. 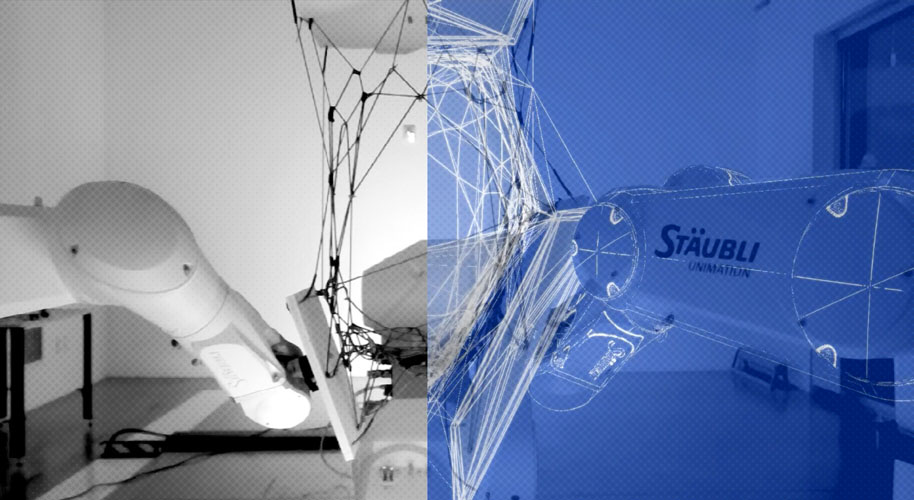 BETWEEN THE PHYSICAL AND THE DIGITAL The translation from digital to physical is the key element in working with robot arms. While it is possible to precisely animate the motion of the
robots, involving other materials in the process could introduce a whole new set of variables. Issues of fidelity, misregistration and other discrepancies in the process represent new design
potentials and could reveal material propensities. The image on the left shows how the elastic fiber shrinks under tension in comparison to the assumptions in the digital model.

ANIMATE PHYSICAL FORM Programming the robots as a motion rig sets the four levels of nested subdivision layers into literal motion. The net is made out of elastic fibers positioned by three six-axis robot arms in Sci-Arc’s robot house.